Living an ethical life inside a “framework of shit” 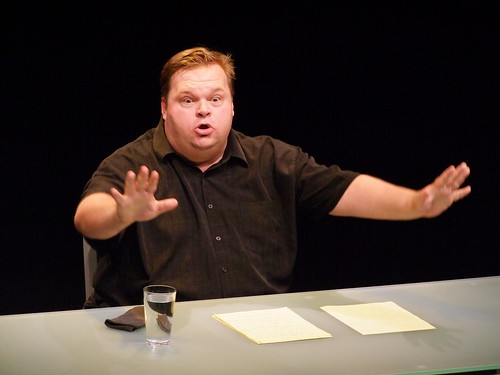 Mike Daisey joined PICA’s guest artistic director Cathy Edwards at Pacific Northwest College of Art’s (PNCA) Swigert Commons for a discussion about making art in a capitalistic society.The talk was originally planned to include a local (unnamed) technologist who apparently backed out at the last minute. According to Daisey, the cancellation was due to the invited guest’s hesitations about Daisey’s current show, The Agony and the Ecstasy of Steve Jobs, which addresses the US role in supporting substandard human rights during technology production offshore.

Edwards led Daisey through a series of questions about his work, its place in contemporary society, and the commercial concerns of creating performance work and art in general. Daisey doesn’t like to be categorized; Edwards offered labels like “performer,” “storyteller,” and “citizen activist” but Daisey hesitates to accept any of these at face value, and least of all “solo performer”. Daisey sees “classification as a shortcut to not thinking” and has, in fact, removed the label “world premiere” from his performances, preferring instead to acknowledge that the work grows and changes from the initial performance (which Daisey calls “the birthing”) to the last. In reference to the commoditization of art, Daisey sees current art value transfer systems as flawed and unsustainable for cultural workers.
Most troubling to the artist is the fact that society tends to only acknowledge information that is easily accessible; in fact, “we perceive the network as the edge of reality”. This is an especially egregious perception in regards to human rights conditions for offshore technology workers, and Daisey’s recent trip to China showed him that the West is astonishingly unaware of (and unresponsive to) these conditions. The question Daisey poses to us for both technology and art commodities is how to have an “honest commercial exchange” which removes the facade of commerce; in essence, “how do we live an ethical life inside a framework of so much shit?”. Daisey’s work probes this framework but ultimately leaves performance participants to work out the answers to this question for themselves.