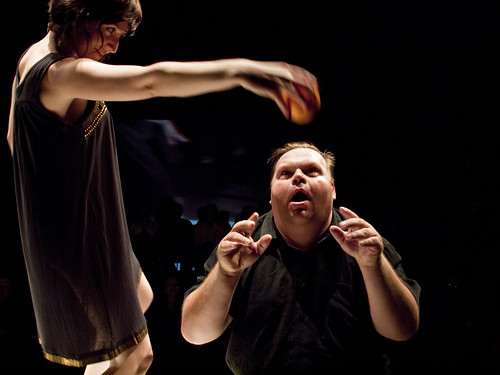 The auditorium at THE WORKS at Washington High School is transformed into a theater in the round for Ten Tiny Dances. A four foot square space surrounded by the audience, with overhead video projected on a nearby screen, allows intimate engagement with the performers in an already intimately-sized area. Ten separate performances on the small stage feed the sound-bite satisfaction of popular entertainment culture, but also allow a a Whitman sampler of artists who can be further explored in additional festival events.
A wonderful array of styles and subject matter in bite-sized chunks is a microcosm of the festival itself: Mike Daisey shattering the object/viewer wall by ravaging an orange, Dayna Hanson’s group breakdancing in colonial get-ups, and Mike Barber and Cydney Wilkes ballroom dancing with trophies. Is the short format less challenging for the viewer? Maybe, but it feels good to change directions so quickly. Like TBA channel-surfing or TBA dim sum, less really is more.