Ten Tiny Dances
THE WORKS/Washington High School
Saturday, September 11, 2010
Posted by Eve Connell
There’s always something for everyone during a Ten Tiny Dances performance, and this 22nd talent round-up presented by Mike Barber went far beyond the usual mark. Each and every piece was amazing, offering something for everyone, anyone, us all. Serious studies in movement and form. Explorations in shock and humor. From the highly stylized to the deconstructed, raucous to subtle, Ten Tiny Dances outdid all expectations of solid gold performance.
Anne Furfey’s deliberate movements in SINK both chopped and flowed in a mesmerizing opening piece. Barber and Cydney Wilkes provided slightly off antics in A VERSION as they managed the tiny space with dozens of trophies in a comical view flirting with 50s/60s dance hall culture. 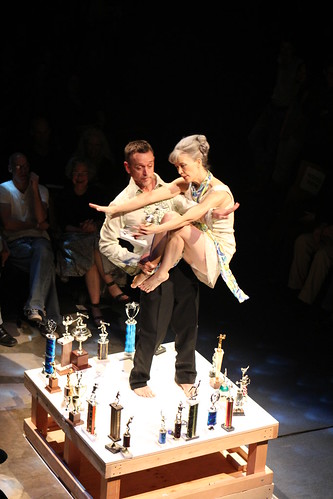 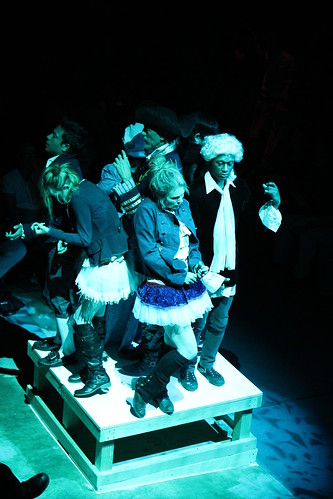 Linda Austin’s NIGH offered up monochromatic visuals and severe movements with a compelling soundtrack (Seth Nehil strikes again). The Woolly Mammoth crew (in my fave costumes thus far) pushed buttons with an edgy, sexualized performance that included groans, moans, and laughs.
<img src="http://farm5.static.flickr.com/4083/4983514566_c1839d3dbb.jpg"
Eric Skinner (BodyVox) immediately grounded us with an impeccably beautiful study in controlled, classic movement in CLEARLY ANOTHER WORLD.
<img src="http://farm5.static.flickr.com/4132/4982989351_daf5db9689.jpg"
"To make the world a beautiful place!" is what Michael Rioux and Monica Gilliam inspired, nay, insisted upon from direct audience participation in DANCE #1, a fun piece for the ironic hipster pretentiously trapped within us all. Tahni Holt's CULTURE MACHINE pushed all sorts of limits, the least of which being hot Barbie doll bods spandexed in primary colors. And, finally MIKE DAISEY played the rube who ends up enjoying much more than he bargained for in an art gallery visit. We did, too. 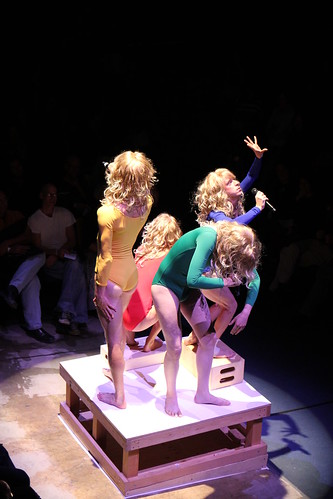 The energy Saturday night was palpably electric, an exchange between and among artists and audience. ALL performances sparkled, inspired, intrigued, entertained. The performers each seemed to be showcasing their very, very best, connected to their goals, their art, their audience. I’m still buzzing from it all.