The Agony & Ecstasy of Mike Daisey 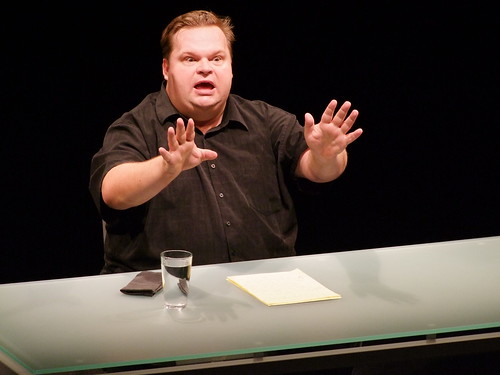 Mike Daisey, “The Agony & Ecstasy of Steve Jobs”
Posted by Michael Evans
Much ballyhooed monologist Mike Daisey more than lived up to his advanced billing in this terrific show that is as much a call to arms as it is a fetishistic mash note to technology.
Coming off a lot like a cerebral, less spastic version of Chris Farley, Daisey’s ruminates resoundingly on his favorite Apple products, the demigod behind their design, and the sweatshop laborers who assemble them.

For a tech geek whose self description as such is an understatement, it was almost a shock to see him reading his remarks off of good ol’ paper than an iPad. Spinning a true tale starting at the very beginning of home computing that progresses into the bleak reality of present day China, Daisey digs deep into the mad genius mythology of Apple co-founder Steve Jobs while poking hard at his (and our own) affection for shiny new toys. It’s during this self-examination that Daisey starts asking such questions as what “Made in China” really means. It’s not that the answers are bad; it’s that his reaction to them is unexpected.
Despite finding out the technological equivalent of how sausage is made, he finds it doesn’t curb his appetite for his favorite Apple made sweets. And neither will it for you. But the stories of child labor, 100 work weeks, crypt like employee quarters, and suicide inducing (literally) conditions will give you pause. However, instead of making the obligatory boycott call–Daisey says such embargos only “make people feel better about not making things change.” Instead he suggests to personally reach out to the manufacturers of the products in which you have a personal connection to foster change.
In lesser hands, this would be utopian claptrap. But Daisey ‘s proselytizing on either tech or global economics never alienates. The message is that it’s still okay for humans to love inanimate objects, just don’t forget about the humans who put them together for you.