Mike Daisey, The Agony and the Ecstasy of Steve Jobs, Directed by Jean-Michele Gregory
Posted By: Jimmy Radosta
Photo By: Gordon Wilson 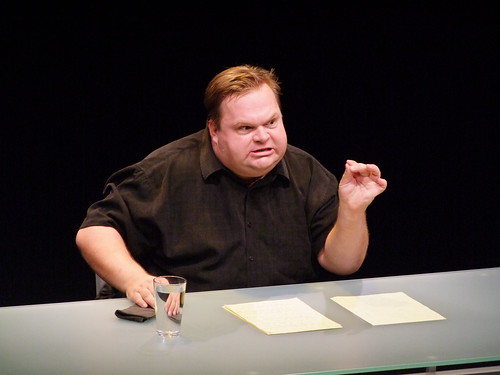 As I sit here typing these words on my 6-year-old iBook G4, I’m haunted by the information that Mike Daisey shared with a packed auditorium last night at Washington High School.
An admitted Apple junkie, Daisey traveled to Shenzhen, China, for a firsthand look at the people who assemble the sleek toys that have become essential to most Americans. There, he posed as a businessman to infiltrate immense factories and interviewed employees who shared harrowing accounts of abuse: a man fired because his hand was smashed on the assembly line; a whistleblower who was blacklisted from finding a job elsewhere; and a stream of people forced to work up to 105 hours a week. (Allow me to do the math: That’s like doing a double shift for every day of your life.)
To keep the show from collapsing under the weight of this heavy material, Daisey toggles back and forth between China and a fascinating history of Apple Inc. In both cases, he manages to find the humanity behind the machinery.
This isn’t the first time that Daisey has railed against the dark side of technology. I became familiar with his work thanks to 21 Dog Years: Doing Time at Amazon.com, a hilarious account of dot-com excess, and he last wowed TBA with Monopoly, in which he managed to weave threads linking the Parker Brothers board game to Wal-Mart as well as the rivalry between inventors Nikola Tesla and Thomas Edison.
What sets apart The Agony and the Ecstasy is that it hovers somewhere between solo theater and gonzo journalism. After all, Daisey risked arrest to report information that Apple simply doesn’t want us to know. (My inner cynic wonders whether his exposé will lead to much-needed government oversight or tighter restrictions on workers who reveal corporate secrets.) He also harnesses the audience’s outrage by providing action steps that can be taken as soon as they reach for the iPhone. (For starters, email Steve Jobs here.)
Toward the end, Daisey teeters on the brink of sanctimony by hammering home a point that has already been made clear. Regardless, he continues to master an approachable storytelling zeal that combines the gearhead geekdom of a fanboy with the analytical wisdom of a global citizen.