Worth a touch of criticism 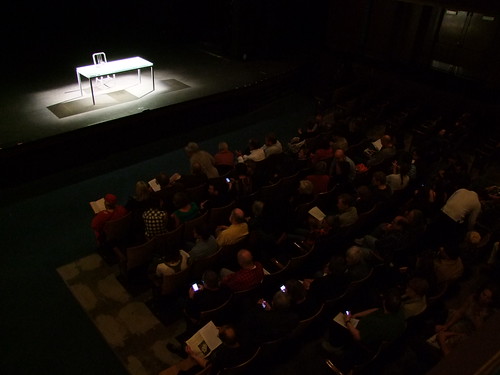 Mike Daisey, THE AGONY AND THE ECSTASY OF STEVE JOBS
Posted by: Robert Tyree
Mike Daisy’s history of ideas and innovations across the history of Apple is wicked good. This makes up about half of his monologue. The other half consists of tales from his visit to the mega corporate Chinese sub province Shenzhen…
At around the 3/4 mark, he had the audience rapt on what had developed into a compellingly bifurcated monologue that expresses two vastly different sides of global capitalism. Unfortunately, he bet his thunderous finale on a call to arms based on the weaker half of his piece, in the process obliterating any space for audience consideration he had opened over the course of the first hour.
Daisey admits that he knows “fuck all” about Chinese culture, and it seems that most of his material about Shenzhen was based on the time he spent there investigating the production sites of Apple products. What cracks the core of Daisey’s material on the subject is his presumption that Chinese people approach their lives just just like Daisey does. He doesn’t seem to consider the fundamental difference in cultural values that orient how a person relates their sense of self to their society and life more broadly. In the end, his piece struck me as resting on an ethnocentric projection that is dangerous and unacceptable in the 21st century. At this point in globalism, disavowal of the historical specificity of one’s own native cultural perspective may be a more troubling oversight than disavowal of capitalism’s ruthless consequences. 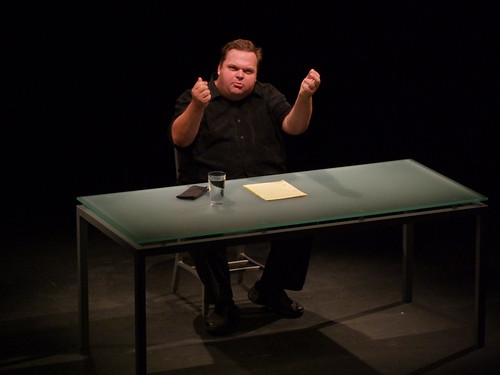 For how richly detailed and engrossing his history of Apple is, there is nary a balancing expression of the historical circumstances that created the present economic relationship with China. Hardly a mention that millions of people, like his translator, “Kathy”, have been pulled from poverty and into a once undreamed of middle class by China’s embrace of state-controled capitalism.
His embodiment of the intricacies, contradictions, and passions of his own “normal American” perspective as an Apple fan boy carry a brilliant portrait of the ugly, yet admittedly efficient, mechanisms of corporate innovation. I really admired his performance of the schizophrenic nature of contemporary consumers who are faced with the task of reconciling a desire for products with the awareness of what we are buying into when we take them off the shelf.
Daisey is surely a brilliant guy, and he must have devoted a lot of thought and compassion to his Shenzen material, but the actual monologue felt so ridden with unexpressed dimensions that it came off as opportunistic simplification, manipulating a complex and important topic into an effective dramatic tool. The fact that he’s yelling at us to accept his conclusions just didn’t sit well with me. It felt like a betrayal of his form to employ quasi-totalitarian rhetorical devices to bludgeon us into his way of thinking.
I’m critical with good intentions. I wouldn’t want to let such a promising piece slide through without challenging what I saw as its weaknesses because its a laudable topic to tackle.
I couldn’t help but compare Daisey to Slavoj Žižek, a similarly charismatic speaker, who addresses the exact same topic of such a willed ignorance of global capitalism’s inhumane costs with a rigor suited to the topic.