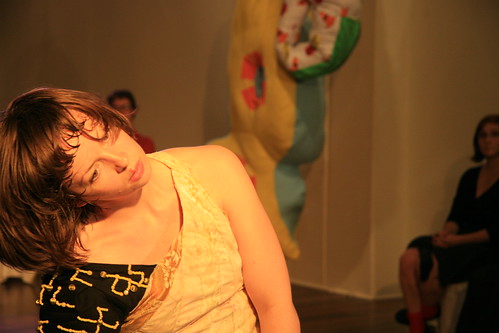 Space + Place.
The first impressions could not have been more different. Walk into Blanket Space: a clean light room filled with brightly colored soft sculptures hanging from the ceiling, the sounds of traffic outside, the evening light fading slowly; this is walking into a dream world where things are strange but cozy, unusual but inviting. Walk into Imago Theater for SoloShow: the blackness of the theater is broken by clusters of lights gathered in a line shine down on the stage-on-a-stage, a large black rectangle floating in a deep sea of black marley, punctuated by a single figure in white, her head turned away from the audience, the sound score rumble sending vibrations through my center; this is walking into a nightmare where everything is known and terrifying, which is not to say I ever wanted to look away. 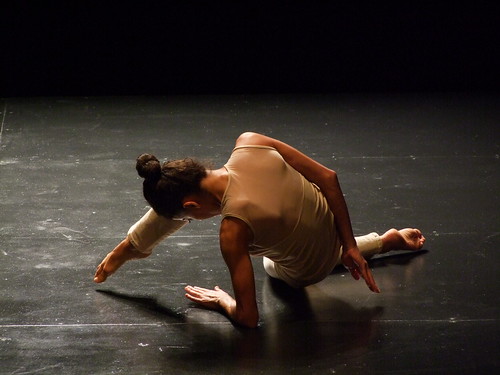 It was a happy chance to see Blanket and SoloShow back to back. On the outside the connections seem but commodities: two solo performances by female dancers with sculptural collaborations. While the worlds Stiles + Kelly and Hasabi created are different in tone and investigation, the joy of the festival format is finding the moments of connection. For me it was the pointed finger.
Stiles choreography, broken in sections progressing from near stillness to full on dancing, investigates gestures and touch, the way the human body interacts with the world around it. At the start she sits nearly motionless inside a soft sculpture, the piece wraps around her head, holding her arm aloft, the two seem inseparable. The finger pointing happens half-way through the piece: it seems innocent enough at first, then strangely loaded, a pedestrian gesture threatens to turn the pointer into an accuser. As Blanket progresses Stiles dons a yellow fringe leg wrap, dances her way through hanging pieces filled with MIDI triggers (one of my favorite sections), and wraps herself in a shiny snake of head-piece. The world is dreamy, but towards the end you realize the temperature has risen several degrees, the hard work of the performance is evident only in the end. The score, created by Unrecognizable Now with Delaney Kelly, is lovely and Rachelle Waldie’s costume evokes Danielle Kelly’s hanging sculptures: Stiles is at once part of and at the mercy of the world she inhabits.
Maria Hasabi also begins her performance in near stillness, but the hard work of her dance is much of the performance. To clarify, the dance here is gorgeous, but there is not much of it in the throwing limbs through space sense. Hasabi holds her poses and we watch as she trembles, the muscles of her arm and tendons of her neck defined by the lights and strain of action, our gaze on her body is an equal player in the performance, perhaps more evident because she so rarely looks at the audience. Her head faces away from us, often at angles that seem nearly impossible, and when her eyes meet ours Hasabi seems to ask: now what? SoloShow is transfixing, meditative, and magical in its way. When she rolls off the back edge of her stage-on-stage and disappears a gasp went through the crowd. We spent so much time looking and now she is gone. When Hasabi pokes her head up a moment later and sets her elbows on the edge of the set it was comforting to see her again, to know that falling off the pedestal was a change, not the end. Hasabi’s pointing finger acts in much the same way as Stiles’: accusing the body of something, yet it is clear that the origination of this accusation is not within Hasabi but from the outside. We are implicated in this, our gaze made her do it.