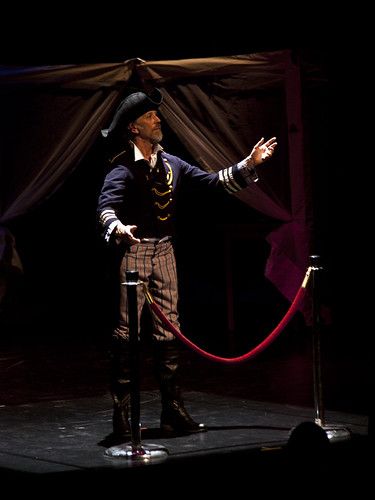 Gloria’s Cause.
submitted by Emily Katz
It’s the year 1784 and a handsome well spoken black man introduces us to the story, invites us into a party.
The curtain rises and a live band plays intricate atmospheric music that progresses into rock.
the actors are dressed in semi period attire but they are taking photos of eachother with their cell phones, one man is wearing a tshirt with a coca cola logo on it.
they aren’t taking themselves very seriously, the scene is casual.

In the next scene, the entire cast including the musicians, wrapped in heavy wool blankets, stand barely illuminated by a beacon of light, the soundtrack tolling ocean bells. They sway as if on a boat. And you believe them.The mood is dark, brooding, and nothing at all like the playful intro.
The rest of the performance switches between physical contemporary dance, musical interludes and songs in rock opera style, historical depictions, and the sharing of intimate personal stories over pie. That is my favorite part. The pie.
They discuss racism and freedom. There is humor in the storytelling, but with a fog of intensity that was difficult to break through. A few times the audience let out bursts of laughter, but then withdrew it, felt the weight and seriousness of the truths: a eagle masked woman monologues about freedom, and you feel it in your chest.
I loved that everyone played an instrument.
There is an incredible scene where we are transported to a wax museum and George Washington is an animatronic character telling us about his life, and then he begins to breakdance when the music changes. They also performed this scene during Ten TIny Dances at the Works later that evening, and I think it was the most entertaining part of the entire show.
The piece ends similarly to how it began, but with the light illuminating broadly the actors bodies on the floor, and the small drummer girl singing a low and mournful hymn.
Then the eagle masked woman makes a screech, and you can’t help but laugh at how funny it sounds, but still the weight is there, reminding us all of our place in the world.
Dayna Hanson, Gloria’s Cause
09/10/10
2010 Time-Based Art Festival, PICA
Photo by Rio
All Rights Reserved, PICA