FLOODING WITH MIXED FEELINGS FOR THE KID

FLOODING WITH LOVE FOR THE KID: Zachary Oberzan
Posted by Tall Matt Haynes 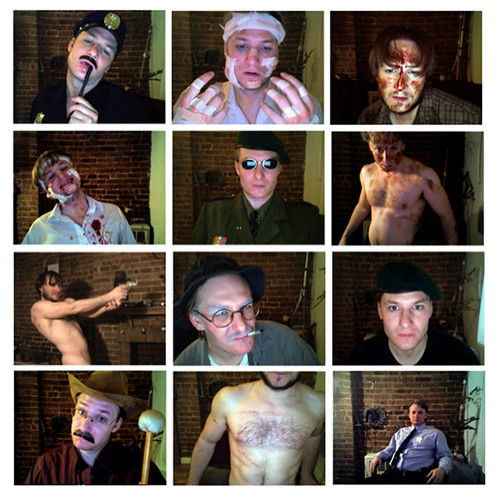 PROLOGUE:
Determined not to re-live his cramped seat squrims from FIRST LOVE, Tall Matt Haynes now stretches out on the floor of an otherwise unoccupied front row. It is Tuesday, 9/14, 8:55pm and FLOODING FOR THE LOVE OF THE KID has just begun. The film is a solo video adaptation of the novel FIRST BLOOD, shot for 96 bucks in a small studio appartment. At the end of the screening, Tall Matt Haynes realizes that he’s probably going to have to give this one a negative-sounding review. This makes Tall Matt Haynes very sad because he’s glad the film was made and is charmed as hell by both the project’s proposals. Thing is…

PROPOSAL A: Strip all film elements down to the bone of outstanding acting, writing and staging, thereby reclaiming the character richness and psychological tension that was buried in the RAMBO circuses… a more violent VANYA ON 42ND STREET, you might say.
PROPOSAL B: Make a gleeful, silly, no-money, no-talent, no-skill, fart in the face of every big-money eye candy dispenser assembled by Hollywood… a self-aware PLAN 9, if you will.
The problem is that PROPOSAL A and PROPOSAL B didn’t become separate films but bedfellows in one film: In his performances, Oberzan gives heartfelt realism here and grade-school throwaways there. His properties include realistic weapons and wounds but also toaster radios and yarn-mask dogs. One moment we get a projected rural road background image, the next moment we get an apartment pillar with a piece of xerox paper serving as a road sign. Oberzan shows film making chops with his uses of split screen, sound design and back-forth continuity but then his haphazard framing, lighting and rhythm suggest someone who is trying all this stuff out for the first time.
Some might say that the inconsistencies are Brechtian but for me the experience was like eating veal cutlets stirred into Lucky Charms cereal: I find both to be delicious but not together.