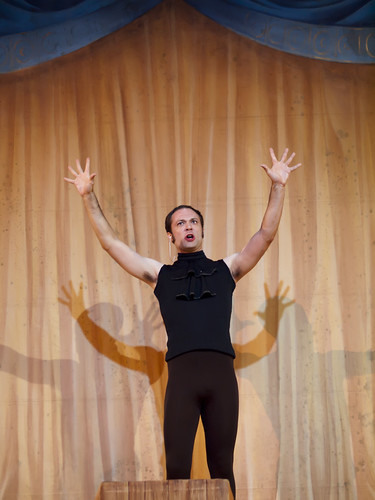 I really wanted to like the Nature Theater of Oklahoma show, if only because everyone around me seemed to be having such a good time. Which is to say, they were laughing. Three quarters of the way through even the heartiest laughs clamped down a bit: the production was tiresome, the funny bits flagging, the overwrought enunciation of the “act-ors” more tedious than wall breaking. The idea for the production is a clever one, the script was generated by telephone interviews where friends and family were asked to recount the story of Romeo & Juliet. Anne Gridley and Robert M. Johanson, dressed in a combination of foppy and trashy “Shakespearean” costuming, play sort-of versions of the title characters as they weave through variations on the theme of the play. Scenes are invented and left out, the name of cities confused for the name of families, and all is done in ridiculous accents (balcony becomes bahl-koh-nee, etc etc).

Gridley and Johanson are charming, but Gridley’s screwed up pucker and even Johanson’s resonate bellow of a voice cannot stand the tide of overwhelming irony. In Nature Theater’s production No Dice they hash through many of the same ideas: actors, working with recordings piped into their ears, say their lines in outrageous accents to break down barriers with the hope that, in the play’s final moments, speaking in their own voices will resonate with the audience. For me, the device worked in No Dice, but here it falls flat. Romeo & Juliet attempts to become a meta discussion of what theater is: the desire of Romeo for Juliet and Juliet for Romeo is really the desire of the actor to please the audience, to be loved or lusted as it were. Since true connection is no less possible than Romeo & Juliet reaching a happy ending, night after night, year after year, the characters and actors struggle on to find meaning. In the end, hearing the poetry of Shakespeare is intended to move the audience to feel something, but the performers had wallowed so long in the pedestrian dressed up for prom, that they were unable to harness the power of that which first inspired. “Putting the ‘w’ in mellowdrama,” as Nature Theater proclaims to be doing, doesn’t make for great performance, or at least not for performance that stands the test of time (45 minutes okay, 75 minutes not so okay, in a few years will anything remain?).

How thankful was I to arrive then at the Winningstad for Radosław Rychcik/Stefan Zeromski Theatre’s In the Solitude of Cotton Fields, in the running for best-of-the-fest this far. Go and see this show. It is not perfect, I would be happy to cut the entire video sequence, but the performers are as energetic as any I have ever seen, the clarity of language exquisite, the music seat shaking, and the use of fog just about brilliant. This is where Polish theater wins over and over and over. From the moment the red curtain parts the action kicks into high gear: a five piece band, the Natural Born Chillers, playing a mixture of electronic and other instruments, blast the audience with a pounding dance beat; two men wearing matching suits, the outstanding Wojciech Niemczyk and Tomasz Nosinski, stand in individual pools of light upstage of microphones; fog pours over the front rows of the audience; Niemczyk and Nosinski dance. It is manic, terrifying, and exhilarating.
Each man in turn, Niemczyk “the seller” and Nosinski “the buyer” approach his microphone and launch into their side of the interaction. The text by french writer Bernard-Marie Koltès paints the scene and characters without any excess. The time is that “when man and beasts are on the same plane,” but the plane here is struggle and desire. The Seller can offer The Buyer that which he wants most, but the Buyer has the ultimate power of refusal. When the no is given the Seller breaks into a weep turned scream turned song, all the while applying a clownish lipstick to the rim of his mouth. A moment later the actor turns upstage, the moment is over, there is no character, no psychological drama to get caught up in, it is there for us and then it is gone. When the Buyer strips down, meticulously, suddenly he is standing alone in the cotton field. I imagine I can see goosebumps rise on his flesh, he turns vulnerable in an instant and the Seller pounces gently on this. He takes off his suit jacket and tenderly places it on the shoulders of the other man. The Buyer does not need to go cold to flip the switch of power back in his court, he simply waits, removes the jacket, holds it out to his side, and drops it on the ground. This moment captures it all: lust, desire, power. It is brutally honest and bare: there was no artifice necessary. Violence and lust are but two sides of the same coin, the sweat and stillness burnish the whole picture to a shine. The weapon is performance, please don’t be afraid.