Maria Hassabi
SoloShow
Imago Theatre
Monday, September 13, 2010
Posted by Eve Connell
Just the kinda performance I typically don’t enjoy–one in which nothing (much) happens. While my counterpart was bored out of her mind right from the get-go (a place I could have gone, too), very early on in Maria Hassabi’s fascinating study, a switch flipped for me and I remained riveted to my seat for the duration. This experience totally snuck up on me. 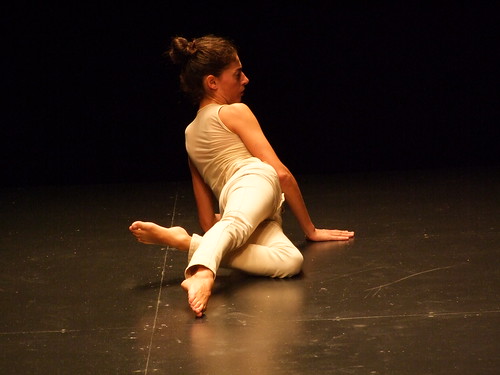 Minute, controlled movements, city-subway soundtrack, and anxiety-provoking facial expressions all added to the palpable tension of this piece. Hassabi’s disciplined actions seemed like nothing and then quite suddenly like something as they flowed into one another, allowing her to move carefully, painfully across the stage. At the start of SoloShow, the soundtrack was city-inspired noise, a perfect accompaniment to Hassabi’s pained look and twitching muscles. Yet as the piece progressed, the noise quieted, as did her movements. Less twitching. Less holding. More fluidity. More calm.
At one point, perhaps due to her monochromatic (beige) clothing, I imagined watching an animate sculptor’s model–you know, the wooden human frame whose legs, arms, torso all move on small hinges. Hassabi was that wooden model, moving carefully, poised and cautious about the outcome her movements might inspire or incite. 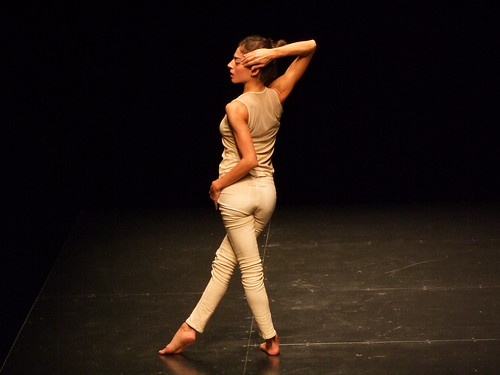 Maybe I’m a slow learn, but I didn’t quite pick up on references Hassabi intended in this particular study–the female form through the lens of pop culture and art history. The limits of self control, pushing beyond tension and boundaries, experiencing anxiety (Hey, wait! I got it!) via movement was what resonated most for me. As mentioned above, my counterpart was not in the least bit amused, finding this sort of work the most ridiculous, narcissistic display. A SoloSpectacle. At the end of the performance, Hassabi’s pained looked was transformed. She appeared pleased with herself, and relieved. I was pleased with her, too, though not quite relieved that it was over. I’m not sure when I’ll ever experience such a transformation fueled by movement again. 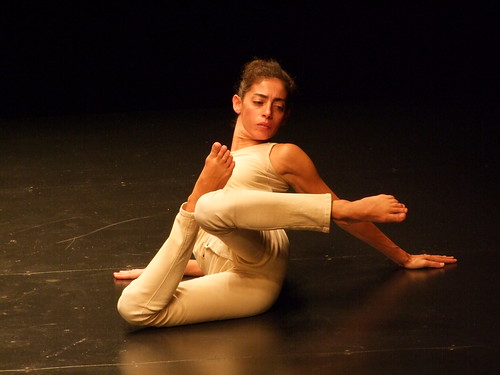