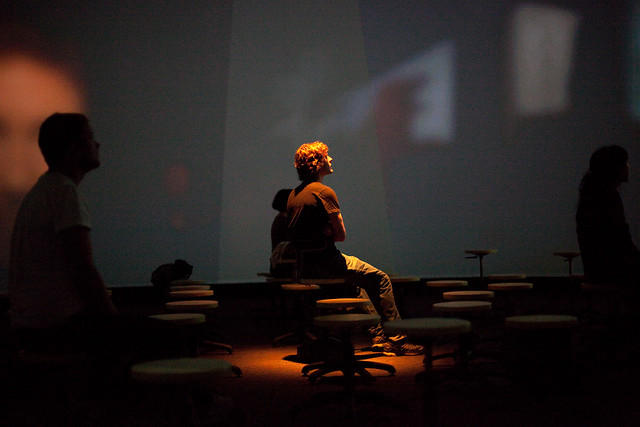 t’s not a spoiler to tell you the following, since it’s posted right outside of the installation space: this piece, a “film” projected on a 360 degree screen, has one chair, in the center, that controls the “camera.” Essentially, throughout the piece you can see a blurred version of what’s happening throughout the room, but the person in the center chair controls which portion of the film is in focus.
There’s certainly a fair amount of wink-wink happening here–they even mention Disney, and it reminded me sometimes of Muppets in 4D at MGM Studios, purposely doing things to show “look what we can do!” But then, when you decide to mount a show that claims (during the show) to be a film about war, you’ve got to do something to keep it from being completely depressing.
There are moments of horror, though. If you’ve never seen the footage of an Apache operator shooting at farmers in Iraq*, be prepared to be shocked as to how much it a)looks like a video game, and b)makes the soldiers who are talking seem like calculating monsters.
Another interesting undercurrent here: the age old way that Americans can handle violence, but not sex. One of the camera operators tonight watched at least 60 seconds of that Apache video, but the occasional nightvision pixel-porn rarely was on the screen for more than two seconds, if that–one fellatio clip produced laughter, while the Paris Hilton sex tape made the room quiet, causing the camera operator flee, flee from the nudity!
All in all, this show made me think about the choice to look away–figuratively, literally–and the reasons we all have when we decide where to place our attention. I personally spun quickly in the chair at least once–because I had wanted someone to do that the entire time. I was in the installation long enough that I could track which parts of the film I hadn’t yet seen, and thus wanted to focus on when it was my turn in the chair. And despite wanting to make an entire room squirm, I couldn’t bring myself to violate the social contract regarding porn long enough to find out if the couple even finished the job.
The final four hours of There is Still Time..Brother are on Saturday, from 4:30-8:30. 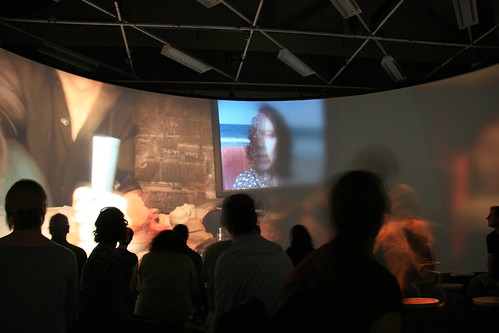 *I considered linking to this, and thought better of it. Find it on your own, folks–it’s easy.