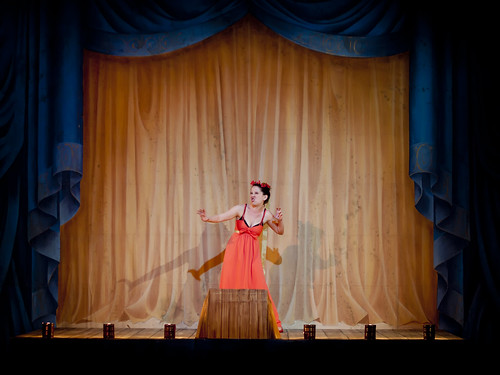 Nature Theater of Oklahoma: Romeo and Juliet
Posted by: Robert Tyree
“Fret not thine chuckle.”
-Made up Shakespeare by me.
Double backing, second guessing, hemming and hawing, WITH CRAZY GUSTO!
Romeo and Juliet operates through a slew of connections that reveal more about the recaller than the recalled. Shakespeare’s slaughtered text becomes a vehicle fueled and driven by contemporary memories and associations, careening about aimlessly. I care less about the make and model of the vehicle than the weight and momentum of its movement. Which is to say the stammering slang and staccato sort-of-sentences pipping from fabulous performers carried me across giggle land.

It felt like the R&J prompt might as well be a ruse, just a tool to coax people’s colloquialisms out into the open. And the performers have a ball with the material, the cadence of which seems like it might be tacked to recordings of conversations that the actors listen to on iPod headphones. We get an entertaining parade of vernacular and intonation. A peek under the hood of our language. 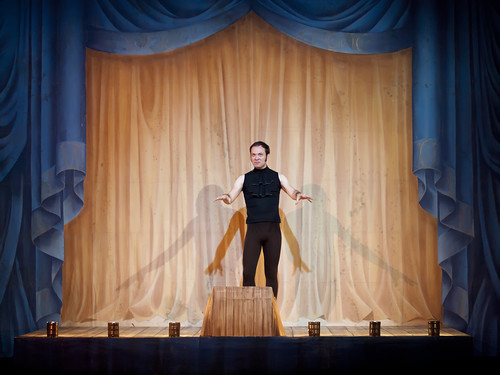 The chills came once I connected the theatrical second-guesses of the Nature Theater of Oklahoma performers to the epic Beckett Trilogy that I had seen the night before on the same stage. Actors, one at a time, embellishing the slippery memories of a source text ridden with uncertainty. “At least I think that’s how it went…” And an audience striving to follow frantic utterances, hoping to find whatever crystalline insight into our own condition these restless text might yield.
What does the back cover of my Beckett trilogy say? “Mr. Beckett seeks to empty the novel of its usual recognizable objects – plot, situation, characters – and yet to keep the reader interested and moved.” -The New York Times Book Review
In the Nature Theater of Oklahoma’s piece we have a similar emptiness of narrative integrity. I too have a vague recollection of the R/J story, and the I really don’t care about specific inaccuracies in the recollections. Instead I’m caught up in a memory wetland where the object of language is so diffuse and irrelevant that I end up dumbly following the meta-character of language itself: turns of speech, comical pronunciations, ungracious associative swerving.
If the challenge of repeating a work is to re-engender the same disruptive power that the “original” work (is presumed to have) generated for long past audiences, then today’s audience certainly gets something unmediated by history. The language feels alive, and I wonder if audiences of the original Shakespeare theater felt a similar sensation.