Felt Noelle dissolve her mammal bod into an alliance with the rest of material existence via the gateway drug of deceptively non-subversive pillow-like objects. 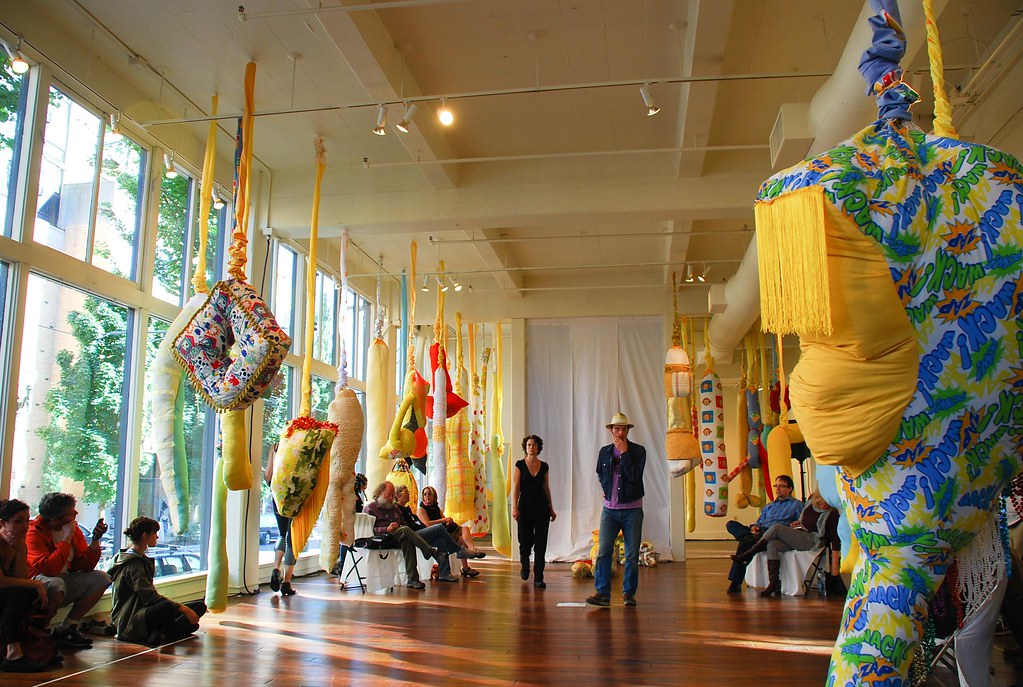 Danielle Kelly and Noelle Stiles, Blanket
Posted by: Robert Tyree
Blanket is aptly named; it felt really nice inside. Hugging helped. Nice to have the work’s aesthetic live inside me in a harmonious sensation; no small feat.
I was set up by magic: the moment my tactile experience of getting fresh with my dream pillow-sculpture echoed aurally in the idyllic installation space. How long were Lucy and I creating the pre-show sound score before it clicked that we were? I bet other (more knowing) audience members watched our discovery wistfully, vicariously re-living their own, moments passed, crystalline realization.
On the way to the show I was almost killed. Some car driver on NE Weidler probably thought that that text message, or tea-party-express radio interview, was so important that you could just assume the light at the intersection of 7th Avenue was green. 40 to 0 in no time flat, but an ugly smell. Luckily she looked up and realized I was there on my bike, ready to die, right? 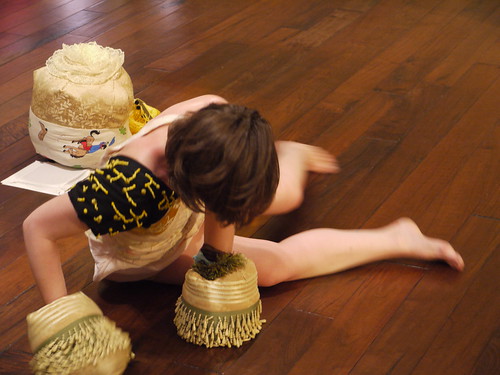 So it was nice to be in the soft, safe installation sharing some love with people I like to be around. The giant windows rattling loudly as death-devices plowed across the streets outside. People with whom I wouldn’t like to share love with, let alone space, gawking outside on their way to the tea-party-express-tea-party-lynching. I relished in the aesthetic isolation.
Noelle moved and so did the things that weren’t what-we-commonly-refer-to-as- “Noelle”. I was struck by how lovely it was to see movement of flesh transfer into the movement of fabric, effecting a poetic equation of mater and movement. Thought of of Witold Gombrowicz’s suspended objects. Felt Noelle dissolve her mammal bod into an alliance with the rest of material existence via the gateway drug of deceptively non-subversive pillow-like objects. Wanted to live in that world, or at least make a halloween costume like it. (wink wink, Danielle and Noelle)
Gotta make a reservation to see it tomorrow, or else you miss out on a sweet closer to TBA:10.
And don’t ever yell at cyclists from a car like a pathetic coward. 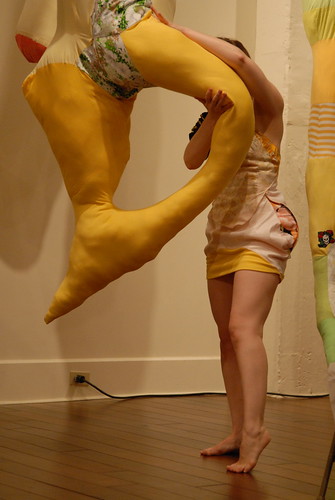