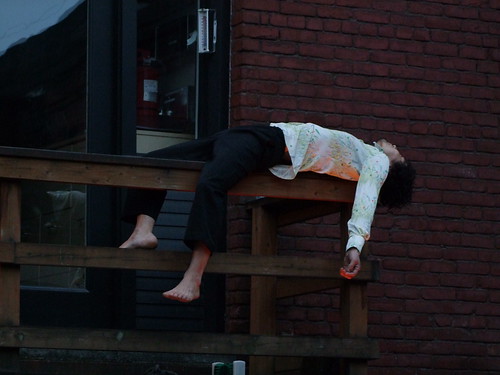 On Thirteenth, Featuring Yukio Suzuki and Zan Yamashita, Curated by Offsite Dance Project
Posted By: Jimmy Radosta
Photo By: Gordon Wilson
For me, the best moments of TBA take the audience out of traditional performance venues and onto the streets of Portland. Remember in 2007 when Gary Wiseman threw a “Silent Tea Party” on the campus of Reed College, or in 2009 when Tyler Wallace and Nicole Dill invited us to listen in on their private conversation in the parking lot outside Washington High School?
On Thirteenth, a two-part performance curated by Offsite Dance Project, took advantage of two very different spaces last night along Northwest 13th Avenue: inside Pacific Northwest College of Art and outside Bridgeport Brewery. In the first segment, choreographer Zan Yamashita read rapid-fire instructions to Ezra Dickinson, creating a crowd-pleasing blend of verbal gymnastics and physical movement.
Next up was the real endurance test: Amid a dreary downpour, the crowd filed out of PNCA and walked a few blocks down the street, where we huddled under umbrellas to see Yukio Suzuki sprawled on the railing of a balcony, fully exposed to the elements. The weather only enhanced the bleak material: As the performer slowly sprang to life, he launched into a brutal cycle of death and reanimation, inflating a white balloon, tumbling down a set of stairs, throwing himself on the wet pavement and climbing a rusty ladder to a nearby rooftop, where he howled into a chimney. It was a demonstration of true commitment to one’s craft and easily the site-specific highlight of this year’s festival.