I have to catch my memory for a moment 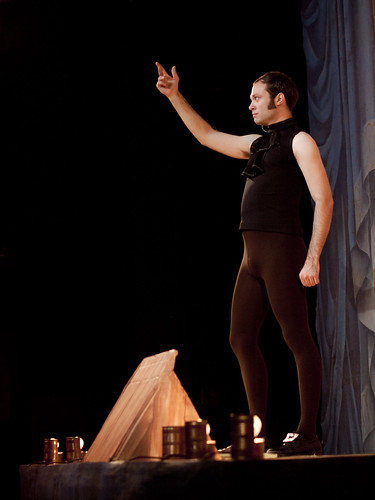 During Thursday’s noon-time chat, Kelly Cotton of Nature Theater of Oklahoma admitted that, as artists working in New York City during the past couple of decades, she and colleagues sometimes felt like they couldn’t get away from The Wooster Group. It seems Wooster is treated as the industry-standard of success for avant-garde theatre in New York, in caliber, creativity, and available technology and funds. As the TBA festival continues, I’m starting to know how they feel. It’s been hard for me to get away from my impressions of the various layers of the Wooster piece when watching and thinking about everything since, and even performances of past years (specifically Hand2Mouth’s Repeat After Me from 2007, but I’ll save those thoughts for a different post). Actually, the only real reminder of TIST…B I had while giggling my way through R&J was the notion that in both pieces it all depends on who’s in the director’s chair. Both render ultimate control to, respectively, who is swiveling in the hot seat, and who’s on the other end of the telephone. I guess I could add that actors in both pieces had audio prompts fed into their ears to both distract and inform them during the performance.

Besides those similarities, however, Nature Theater of Oklahoma stands alone on top of an impression-setting peak in my book. I’ve been kicking myself for not seeing their past performances since their first year here, especially after getting a taste when they did Ten Tiny Dances, the year they were here for Poetics: a ballet brut, but dressed in their No Dice costumes for their tiny dance. In everything they do, the seem to take being playful the most seriously, which was definitely my favorite aspect of Romeo & Juliet. I loved it. Not only do the actors triumph through an incredibly challenging set of enforced restrictions by the directors, they actually look as though they are having fun, especially Robert M. Johanson who was incredibly deft at turning the audience into putty in his hands. The only time the audience was more giggly was during the mysterious moments of the dancer in the chicken suit. There was so much constant and contagious laughing going on that during one rare moment of silence I heard one woman sigh “oh my god” just to try and compose herself. Shakespeare himself would have been impressed by the quality of farce.
The next day’s noontime chat was particularly full of questions from the audience, I think, because the audience is so much of this show, beyond the snowball effect of its laughter. Every audience member sends their unique energy to the actor on stage while comparing their own recollections of the play (or lack thereof) to what they’re hearing and how accurate it seems. When asked if and how audiences compare this type of theatre to their notions of Shakespeare, Kelly responded that no one actually seems to care to discuss Shakespeare, rather they care to share their own stories and emotions that percolated to surface based on what resonated with them from the personal versions of the classic tale. I’m not sure if it’s that Shakespeare isn’t important to contemporary audiences, or that he’s just so ubiquitous his influence on theatre is invisible at this point, but whichever it is, the performance is still just as sweet, and Juliet is still the Sun. Or is it the East?
*********************************************
P.S. In trying to find out more about Nature Theatre of Oklahoma to help me write this post I found a really great interview with Kelly and Pavel by Young Jean Lee, actually, so if you are interested, you should totally read it.