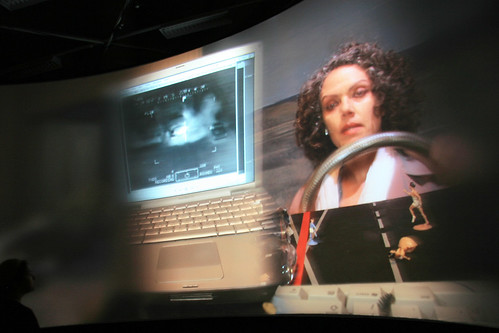 The Wooster Group, There is Still Time…Brother
Posted by Michael Evans
The nagging question was raised more than once –is the concept more important than the art at TBA?

It did seem that a number of works during the festival appeared to be a whole lot of concept and fluffy in finished product. It is not that the style totally submerged the substance, it just seemed at times that the highfalutin hypotheses were heavy on the hot air.
The Wooster Group’s interactive film feature, “There is Still Time…Brother” certainly rocked the idea portion. Stitching together shots from 12 digital cameras and presented on a 360 degree panoramic screen, there was major upside to the concept, particularly with the point-of-view being steered by revolving audience members via a special swivel chair control.
The effect was not unlike watching a whirring array of webcams. Though the continually looping film was about 20 minutes long, it meant that you’d likely see something new in each revolution. Nominally, some folks in the hot seat exercised their power judiciously by making slow, long transitions as if channeling their inner Terrence Malick. Others spun the dial around as if in an ADHD fueled frenzy. It was most telling in how the focus was during the sex/porno segments; some nervously avoided them, while others kept the shot way too long, giggling in glee at how uncomfortable it made other viewers.
Ostensibly “…Brother” has an anti-war theme. But that was tough to grasp during the voyeuristic, webcam roulette of often random images of tech, toys and oh yeah, some porn. Not that there’s anything wrong with that, of course. But ultimately, as admirable as the Wooster Group’s artistic aspirations appear, the most symbolic image in this ambitious production was the not-so incidental shot of a hamster running endlessly on a wheel.