Why Did the Chicken Cross the Stage? 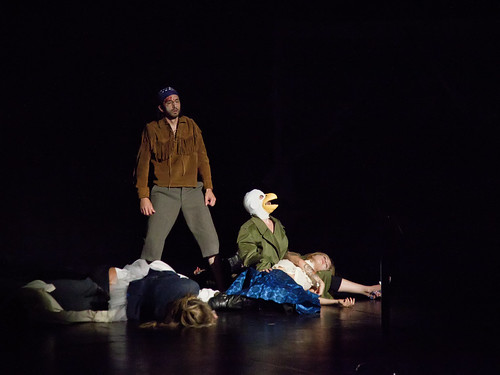 Dayna Hanson, Gloria’s Cause
Nature Theater of Oklahoma, Romeo & Juliet
Posted By: Jimmy Radosta
Photo By: Rio
That question has been burning in my mind ever since I noticed a strange trend at this year’s festival.
Nature Theater of Oklahoma ruffled my feathers when a performer wearing a chicken costume arrived in the middle of Romeo & Juliet, in which an actor and an actress take turns clumsily describing the Shakespearean tragedy. Their fuzzy recollections are crass (Paris supposedly visited Juliet’s deathbed to “jerk off” on her corpse), their pronunciations are butchered (“balcony” becomes “bal-COE-ny”), and their tangents are random (9/11, Anna Nicole Smith, a loss of virginity). It’s like having high art filtered through the mind of a pothead Sarah Palin. The end result is goofy and unpredictable at times, but the joke quickly wears thin. Nature Theater of Oklahoma impressed me at past TBA Festivals by fusing amusing scenarios with its uniquely juvenile choreography, but Romeo & Juliet offered minimal movement…except for the chicken that showed up intermittently, for unknown reasons.
Dayna Hanson was similarly bird-brained when a performer wearing a bald eagle mask inexplicably showed up in Gloria’s Cause, an off-key rock musical inspired by the American Revolution. In this case, the national symbol at least loosely matched the patriotic proceedings, but I’m crying fowl.