The Highs and Lows of Audience Participation 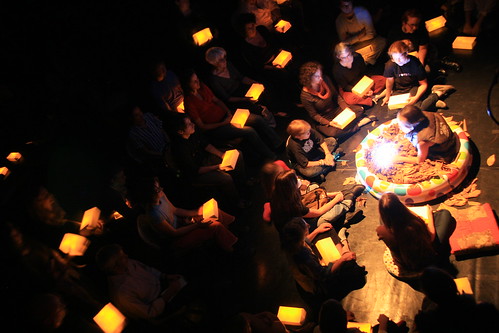 Emily Johnson/Catalyst, The Thank-you Bar
The Wooster Group, There Is Still Time…Brother
Eric Fredericksen & Weekend Leisure, Karaoke & Authenticity
Posted By: Jimmy Radosta
Photo By: Marty Schnapf
Every year at TBA, I look forward to seeing how performers invite audience participation. It can quickly change the dynamic of a show, especially when the material isn’t strongly connecting with the crowd.
Emily Johnson’s The Thank-you Bar is a good example. The dancer/choreographer shared random memories from her native Alaska while holding up signs describing objects in the room: “This is my amp,” “Vaux swifts live in this beam,” etc. It all felt rather disjointed and precious, and the complex, multilayered music from Blackfish didn’t mesh with her whimsical tone. However, Johnson kept the audience involved when she brought out an illuminated “igloo” that she then deconstructed, distributing one translucent paper “brick” to each viewer. (It was an attempt, I believe, to literally deconstruct the myth that Native people live in dwellings made from ice.) Johnson then invited us to gather around an inflated kiddie pool filled with leaves while she told one final story about the resilient blackfish. It created an intimate atmosphere that captured my attention, despite the show’s shortcomings.
Meanwhile, The Wooster Group provided my favorite interactive experience of the festival when it let audience members sit in the director’s chair, so to speak, during There Is Still Time…Brother. The 360-degree film surrounded several swivel seats, and the person sitting in the middle of the room controlled a virtual “peephole” window that determined which portion of the film would be spotlighted. It was a compelling exercise that made every screening unique.
Unfortunately, audience participation doesn’t always enhance a performance. Last night’s finale at THE WORKS promised a karaoke party featuring music videos by Weekend Leisure, while Seattle-based curator Eric Fredericksen presented a lecture examining “Karaoke & Authenticity.” It could have been a fantastic experiment to let the audience command the same stage where we had been entertained for the past 10 days. But instead, most of the singers seemed to be preselected friends of the KJ, and Fredericksen’s lecture spent more time analyzing the 1968 Rolling Stones documentary Sympathy for the Devil than discussing the merits of karaoke culture.
In the end, it felt like nothing more than an exclusive karaoke party with a $10 cover charge, while an academic delivered a dull, sloppy lecture to justify his “research” at the karaoke bars of Berlin. (And you were screwed even if you avoided the auditorium, because THE WORKS shut down all of the video installations early.) A disappointing finish to an otherwise impressive festival.