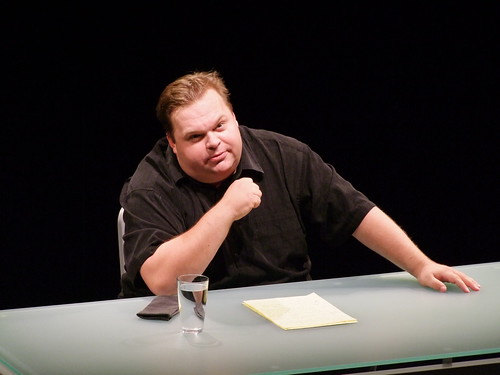 Mike Daisey, Notes Toward All The Hours in the Day
Posted by Michael Evans

Mike Daisey set the bar high with his terrific show, “The Agony & Ecstasy of Steve Jobs” during the first weekend of TBA. Would its successor be rave worthy or a raving disappointment?

The good news on Daisey’s “Notes Toward All The Hours in the Day” is…that it’s all good news. In the spirit of the festival, it was a very much time-based piece. Purported as part of a proposed epic day long monologue (!!!), the first thing you notice about this show is that its much funnier than the galvanizing Jobs work. “Notes” plays a lot like an episode from a sit-down comedy version of “24.” Except without terrorism. Or jingoism. But there’s plenty of violence and sex. Well, at least a story about the violence of sex.
Sputtering, “Why should there be art in the afternoon?” as if lost in a hangover haze from too many nights spent at the Works, Daisey’s matinee monologue had a distinctly Portland flavor. There were the requisite references to such local landmarks as Powell’s Books and the Mark Spencer Hotel. The observation that people here look less like they’re on drugs, but rather that they are drugs was hilarious and insightful. Further proof that it’s invaluable to get an outsider’s perspective on your hometown.
Daisey’s self deprecating style is charming and disarming. And he’s a superb actor, to boot. The personal anecdotes roll out effortlessly but methodically. Extemporaneous as his performance was, it seemed nonetheless very carefully crafted. It wasn’t accidental when he said, “without narrative…we are lost.”
Whether detailing the pitfalls of dating a prostitute or prattling on about the power of theater and the folly of making art, his narratives were superlative. The dude certainly lives up to his billing of “master storyteller.” Daisey’s harrowing recollection of a suicide attempt segueing into an apocryphal recounting of the sordid life and times of rocker/raconteur Warren Zevon was wrenching and mesmerizing, lingering long on after the performance ended.