It’s Got A Good Beat…You Can Dance To It 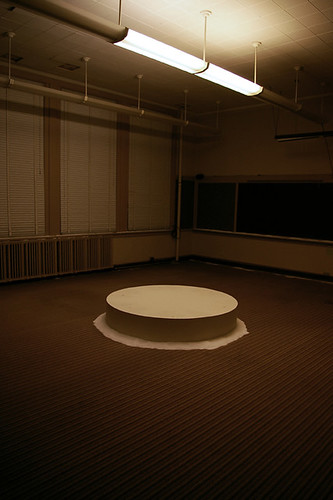 Dan Gilsdorf, Diabolus in Musica
Posted by Michael Evans
In a dimly lit classroom, a small vocal group stands almost motionless on a simple raised platform, They harmonize a steady ominous tone–a sound supposedly banned by the Catholic Church back in the 18th Century day . The stage and edges around the room are ringed by a white powder. Is it salt to ward off evil spirits? Or priests?
I know what you’re thinking. Hey, is this the new episode of “Glee”?

Dan Gilsdorf’s “Diabolus in Musica” is literally, a one chord pony. A cast of forlorn souls sing this lonesome sound low and long. Real long. For a scheduled four hours. If this isn’t the devil’s music, then metal mavens Slayer must be right–God really does hate us all.
But really, no one is expected to make it through the full afternoon performance. Even Beati Chorum, the local organization providing vocal talent, rotated singers in and out on the fly as if it were in a hockey game. Suffice it to say It was disappointing to see the group dressed as the college kids they likely are. Robes or other religious style costuming would’ve really hit the spot, but of course that would’ve been way too obvious.
I didn’t make it through the full run either. Just long enough to stay focused. But not so long to feel like making shadow puppets. Or sing along. Or do anything that might cause the performers to break character. Stayed just long enough to go into a trance. A small trance, mind you, but a trance nonetheless. During my meditative state I pondered how “Diabolus in Musica” would’ve looked if it had been produced using the 360 video technology of the Wooster Group’s “There Is Still Time…Brother.” Thought that would be quite cool. During my trance I considered whether they would be a good choice to hire for my kid’s birthday party. Although the prospect is endlessly entertaining to me, probably too minimalist for grade schoolers.
Before leaving, a little boy seemingly came from nowhere, began running, sprinting circles around the perimeter of the stage . He made it through a few revolutions before his mom led him away. Not sure if it was part of the show, but much to my disappointment the singers did not burst into flame; nor any demons or angels conjured. Oh well. Perhaps next year.