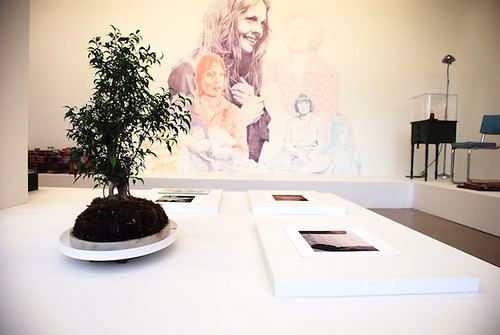 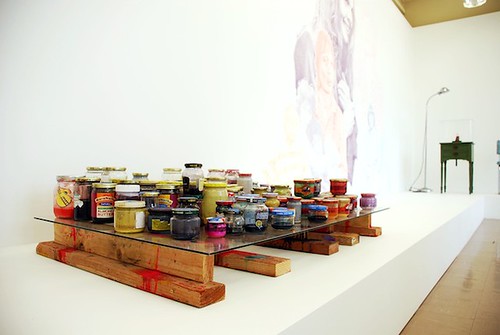 A large window framing a collection of thriving potted plants. A video of sunlight through an open door, curtains blowing in the breeze. A central pedestal with stairs ascending towards the ceiling, prompting a circular exploration of the room. A fan blowing sheer flags gently towards a hanging pendant brushed with the words “I’m sorry”. A tiny dancing figure under a plexiglas vitrine on an antique table. A wall of dripping, monochromatic canvases. An oversized mural of iconic actresses, drawn in pastel shades. Stacks of newspapers and books (Alaska, California) and a spoonful of melted ice cream. A collection of colors in glass jars labeled with enigmatic titles (“Dirty Tan Pants”, “Beachy Night”). 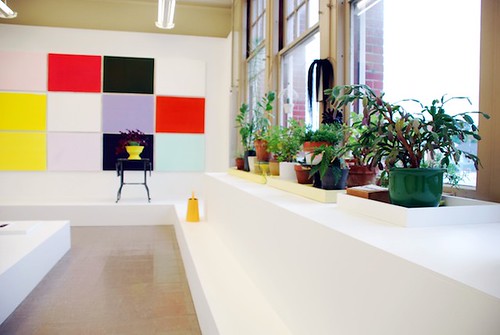 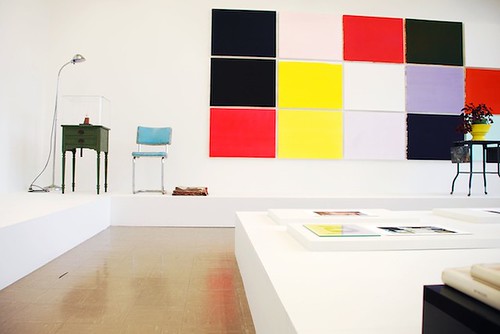 A large-than-usual audience gathered to hear Storm Tharp and PICA’s Kristan Kennedy discuss Tharp’s “High House” installation at THE WORKS, prompting the ON SITE chat to happen in the hall outside of the room housing Tharp’s work. Tharp and Kennedy talk about the yearlong process of planning and installing the installation Tharp describes as creating “remarkable moments from unremarkable objects.” The artist has an intense appreciation for each element, each arrangement, in the room. The room is a meticulously curated collection of “the things that are intrinsically pleasing to me,” he explains. “The objects in my life bring me joy, even subconsciously.”
Tharp describes the artistic production and commercial pressure he is under as wearing; he and Kennedy, a longtime friend, wanted to create something different for this installation. On an early visit to the artist’s residence, Kennedy noticed a place at the end of Tharp’s table he uses as a continually evolving display of sculptural objects, flowers, and imagery. She suggested that the emotional satisfaction he found in this practice could be the basis for the installation. Tharp began to consider the emotionally satisfying elements that support him during the often-crushing day-to-day business of creating, and the idea for the show was born.
“I put everything on a stage,” says Tharp, describing his intrinsic drive to elevate plants and objects on pedestals around his home and studio. This idea of elevation, combined with Tharp’s habitual need for “light, space, and air” was woven into the installation as a feeling of ascension, especially the idea of “becoming what you want to become,” and gratitude (“what does being thankful mean?”), resulting in what Tharp considers an almost “alpine” sensibility; a “high house”. 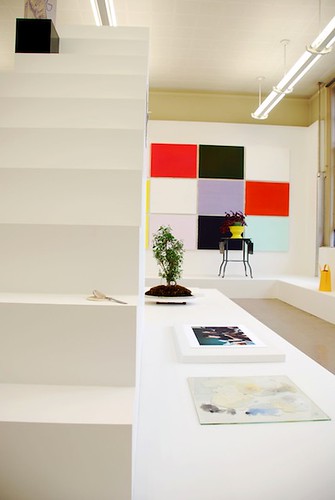 Tharp wishes to free the work from the confinement of concept and instead create a sensual environment; color as harmony, and the visual reverberation of objects placed near one another. Tharp is playing with the energy between elements in order to create experiences, and sees this practice as a deep thread that touches his work in various mediums. He seeks an “emotional revolution” in the work, and the room delivers an intensity of presence in whispers, like a sacred space. 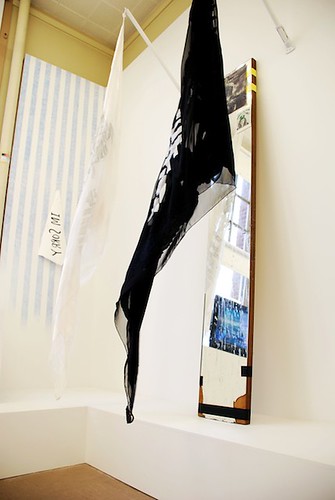 The room also whispers of a darker side. Intense artificial light acts as element of the work by contributing to the clarity of the space, but also to its unreality, lending an edge of discomfort. The perfectly placed, fetishistic, controlled aspects of the work are echoed against the pristine white space, just as the graphic nature of drawings is revealed on white paper. Tharp explains that the sheer flags blowing in the fan’s breeze offer the embroidered reminders “not the first time” and “not the last”.
In the end, a complex environment with both light and dark elements humanizes the work. “It’s like everyone’s mom when she was great,” says Tharp, recalling the way his assistant Ashby describes the show. It is so mom, but distilled; intense, but fleeting, like a sudden memory triggered by a smell or the slant of the sun, a perfect moment, enshrined.
High House is on view through October 17 as part of Human Being, curated by Kristan Kennedy.
September 23 – October 17
Thursday – Friday 12 – 6:30 pm
Saturday – Sunday 12 – 4 pm
Washington High School
531 SE 14th Ave. Portland OR 97214