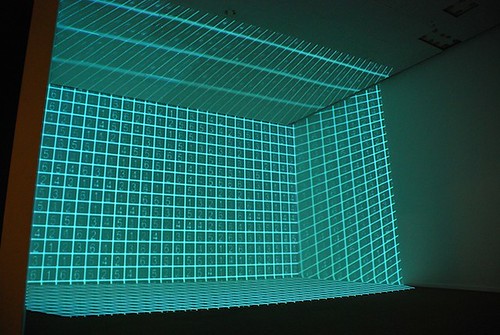 Charles Atlas, Tornado Warning at TBA:10. Photo: kerosene rose.
With a career in filmmaking that spans nearly four decades, Charles Atlas has been called the “court portraitist of the American choreography and post-punk scenes.” His work has ranged from gallery installations to live video performances to documentary collaborations with artists including Merce Cunningham and Marina Abramovic. In this five-channel video installation, Atlas contrasts an orderly space with a chaotic environment of sound and images that evoke memories of his personal history and reflect a culture in constant flux.

Kristan Kennedy: Tornado Warning is a rush of images and sound, all of it together acting as an alarm of some sort. When discussing the piece, you have described it as referencing your childhood in St. Louis, Missouri, and the awareness that, with the storm alerts, came anxiety, preparation, wonder, and fear. The soundtrack traverses many decades, with strong, relentless passages of eighties industrial music. It is this music in particular that evokes memories of other threats against us past and present: AIDS, war, political upheaval… When you started delving into your personal memory and experience for the piece, did you expect that it would speak to a greater cultural chaos?
Charles Atlas: The origins of this piece really started with a vague feeling I was experiencing of anxiety, apprehension, dread, and concern, directly related to what I felt was going on in the wider world. As with many of my art works, I began to collect images as a way to find out what I was thinking and feeling; the ones that stuck became my guideposts.

Other thoughts and references accumulated and began to adhere to the central idea/feeling. It was only then that the idea of a ‘tornado warning’ entered the picture and seemed to be a useful and meaningful metaphor. It was then also that I connected it to my childhood memories.
The other starting point for the installation was a dialectic one of making two adjacent spaces that provided sharply contrasting experiences: conceptual, visual and, aural. So: straight lines vs. spirals, sound vs. silence, black and white vs. color, order vs. chaos, etc.
KK: In contrast to the upheaval in the multi-channel piece, Plato’s Alley is silent and ordered. Can you talk about how the proximity of the works affects the total experience?
CA: Because of the proximity of the two spaces, the sound inevitably bleeds from the noisy space into the “silent” one. Despite the contemplative nature of Plato’s Alley, it’s hard to shut out the sense of the adjacent chaos. I think that’s getting close to describing the total experience I want to offer.
KK: It seems that throughout your life as an artist you have existed at the intersections of genres; although you work predominately with moving images, they have become documentaries, sculptural installations, music videos, sets, dances, etc. Can you talk about your interest in working within the work of others, either as a collaborator or a floating eye, documenting, witnessing, or directing?
CA: Too complicated to answer.
KK: What does it mean to be human?
CA: “Human” is definitely a word I think of in the context of my creative work, particularly because so many of my pieces directly involve the human body as dancer or performer. I am drawn to engage a broad mix of people as subjects and to portray their range of experience from dealing with common everyday emotions and activities to contemplating issues of life and death. Interestingly, when I was making Plato’s Alley, I set out to make something as “inhuman” as possible. So that it would contrast with the rest of my work.
Atlas is represented by Vilma Gold in London.
This conversation was excerpted from a collection of interviews published on the occasion of Human Being, a series of exhibitions, installations, and happenings curated by Kristan Kennedy, for PICA’s 2010 Time-Based Art Festival. You can download a PDF of the full ON SIGHT catalogue here, or pick up a hard copy at the Washington High School galleries (through October 17), or at the PICA Resource Room.