Ronnie Bass: The Astronomer and 2012 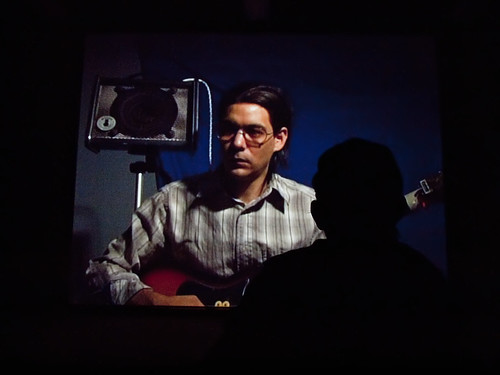 Ronnie Bass, The Astronomer at TBA:10. Photo: Rio.
Ronnie Bass’ videos are narratives of transformation rooted in the ideals of contemporary belief structures. Both 2012 and The Astronomer involve a vision of escape to a better place, and the start of a new world. Against a backdrop of amateur astronomy and housebound experiments, Bass’ synth-driven soundtracks provide soothing affirmations to assuage our hesitancies and fears of a brand new age.
Kristan Kennedy: When we first met, you spoke to me about how the voice of your characters–in this case the Astronomer–was an extension of yourself, related to your natural proclivity to be a sort of constant reassuring presence. At first, it was brought to life by a voice detached from the body (through the computer); what made you attach the voice to a body and moreover, your body?
Ronnie Bass: I was watching Steve Wilson, a musician that I was producing at the time. He would come to the studio and speak, sing, or scream into the microphone and what he wanted to convey was immediate and unquestionable. At the same time, in my own work, I was thinking about how to use prose to depict more internal situations within the course of a narrative.

I also took my and Steve’s working dynamic from our collaboration and used it in my videos. You can see this in the call-and-responses. There is generally one person with unusual potential that’s closely connected to his raw emotions. I like to pair him with his counter point: the person who can provide consolation and guidance to help harness this potential. This relationship may be between friend and friend, father and son, or, in the case of the Astronomer, friend and blanketed friend. These situations are close enough that there became no reason to disconnect the voice from myself or other phases of myself.
KK: Where does the music fit in? Are your songs a script or a score?
RB: They’re scripts that are also scores. I write the music first. This largely determines the scene. I have a general idea or a particular feeling
before I begin writing the music. I’ll finish all of the sound and text before I begin filming. Afterwards, the audio is laid on top.
KK: Is it important for you to have the story end or to resolve?
RB: It’s important that it doesn’t. My stories are about working one’s way toward something. If that something is reached, there’s not much more to do.
KK: Is the figure under the blanket human or otherwise?
RB: I think he’s human or some phase of human. If anything, he’s nervous energy in human form. Actually, during filming, every time I was in discussion with the blanket, there was no body inside. It was stuffed with pillows.
KK: In poring over (and sometimes barely discerning) the conflicting texts, theories, and musings on “existence,” I am stuck on Heidegger’s definition of “Dasein” or “Being.” In [Kevin] Aho’s book Heidegger’s Neglect of the Body, he describes Heidegger’s assertion that obsessing on the present–being preoccupied with the mundane or everyday–is an inauthentic way of being, and that we are constantly pulled into “the movement of falling.” It is then that we experience anxiety, or a desire to be free from ourselves. Aho goes on to say, “Anxiety makes it possible for us to resolutely own up to the unsettledness of our existence.” Can you tell me a bit about the role of anxiety in your work?
RB: Anxiety seems to be the effect of any large endeavor that has never happened. My blanketed friend says that he’s afraid, but it is actually anxiety that plagues him because his concern only exists in his projection of a future. Their situation seems too foreboding to embrace anxiety even if it brings reflection to their problems. After all, they’re fleeing and it seems like everything is left behind.
KK: What led you to start performing your videos live? What is Gandalf ‘s role? Is this part of the continued story line?
RB: In a video that I made a few years ago, I perform with a backing band. When a curator asked me if my band and I could do a live music performance for a show, I had to improvise because my band doesn’t actually know how to play instruments; they were only acting like they were playing instruments in the video. I solved this by projecting a prerecorded video of the band synced up to my music while I stood in front of the projection and performed. That eventually led to me speaking back to the screen and to reenacting my narratives. For the past year I have been producing Gandalf Gavan’s German
pop music. As with Steve, Gandalf writes the lyrics and I compose the songs. I was working on this while putting together The Astronomer project. The crossover that I always saw between the two projects is that they contain a slightly blurry sense of optimism paired with a clear set of tasks and a symbiotic friendship. Gandalf opened for my first Astronomer performance. I thought of it as a good introduction because it set a tone for what was to follow.
I didn’t plan on Gandalf being part of the continued storyline, but it has incidentally changed the narrative that exists outside of the video work; the Astronomer’s non-blanketed friend is a strapping German pop singer.
This conversation was excerpted from a collection of interviews published on the occasion of Human Being, a series of exhibitions, installations, and happenings curated by Kristan Kennedy, for PICA’s 2010 Time-Based Art Festival. You can download a PDF of the full ON SIGHT catalogue here, or pick up a hard copy at the Washington High School galleries (through October 17), or at the PICA Resource Room.