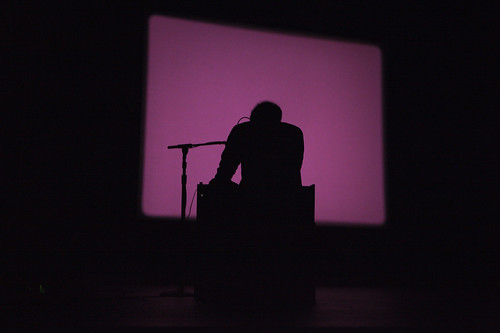 Act 1: Color Film 5 (Madison Brookshire) and Field Organ (Tashi Wada)
“The subject of the work is duration, with color as the medium through which we experience it.” – program guide, New Musics

A wall of color is the backdrop for two simultaneous reed organs. The color field almost imperceptibly shifts, meaning you can’t see the increments of change, just the change itself. As soon as you stop looking, everything is different. Wada’s two-organ duet produces a similar effect with an opposing approach; you hear every sustained note, both melodic and discordant, in real time. Because the musical progression is so fluid, however, the emotional responses generated can only be realized periodically. Brookshire and Wada’s works are a brilliant pair and together produce a realization about perception of time and visceral response that is greater than the sum of its parts. Something previously hidden becomes known: the liminal space between hearing/seeing and responding emotionally is suddenly visible. 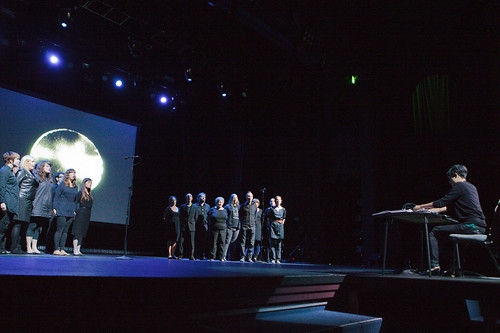 Act 2: PART (Grouper)
Grouper’s “tape collage” matched with Flash Choir’s vocal instrumentation puts the central focus on the flickering images on the screen. The result is non-narrative (or at least non immediately so) and alternatively lulling and haunting. The staging, whether intentional or not, made the work somehow less accessible; if the use of tape is inherent to the work, it would be intriguing to make the process at least as visible as the choir. 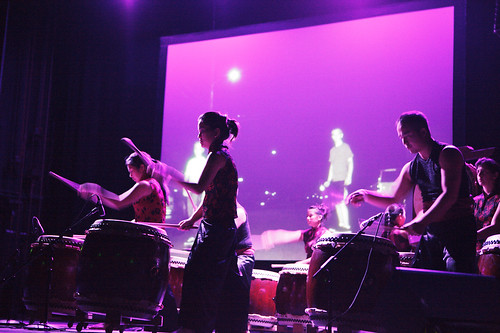 Act 3: Mourning Youth (Claudia Meza)
“…if time passing can only be experienced and digested through memory…then ‘youth’ as a concept will always be mourned” – program guide, New Musics

Memory and reality collide in Meza’s non-mournful Mourning Youth. Powerful, charged images are slowed to iconic speed and paired visually with each other and sonically with taiko drumming and choral response. Meza’s collaboration with Portland Taiko, Flash Choir, Thomas Thorson, Chris Hackett and Allie Hankins is an evolving work; the movement portion was recently added and seemed less integrated than the other elements of what Meza calls a “wordless opera”. Reminiscent of a Greek drama/music video mashup, the performance is charged by searing visuals and heart-pounding sounds, describing the electric physicality and heightened perception of both experienced and remembered youth.