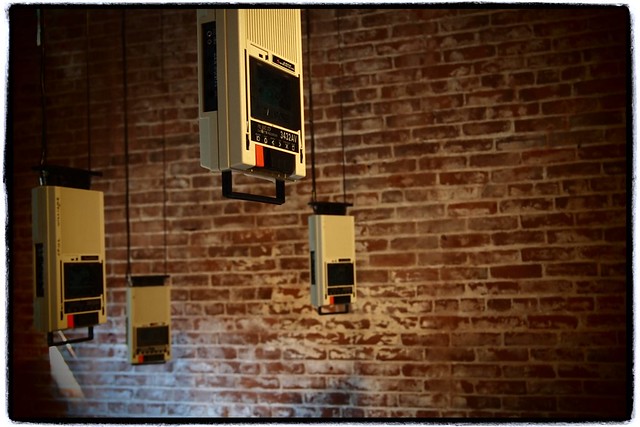 Claudia Meza’s Water is intended as an interactive sonic experience. Housed in the White Box Gallery at UO’s Portland campus, Califone tape recorders hang suspended from the ceiling, speaking both individually and collectively. Intuitive gallery behavior suggests not touching, but the tape players are intended to be used. Each contains an “endless” looped tape that can be stopped and started at will by participants. The sound fills the room until it is unclear which element of the composition is contributed by which tape. The experience is immediately visceral; the surround-sound quality of multiple sources envelops the visitor on both an auditory and physical plane. From outside, the occasional Max train adds to the bass vibrations of the collected loops. Each tape offers a specific auditory layer that feels eerie, metallic, ringing. The collective sounds suggest subterranean movement, hinting at the macabre tones of old vinyl sound effects collections. A few players, I’m told on the last day of the exhibition, are broken; rendered mute through use, obscuring part of the once complete score. 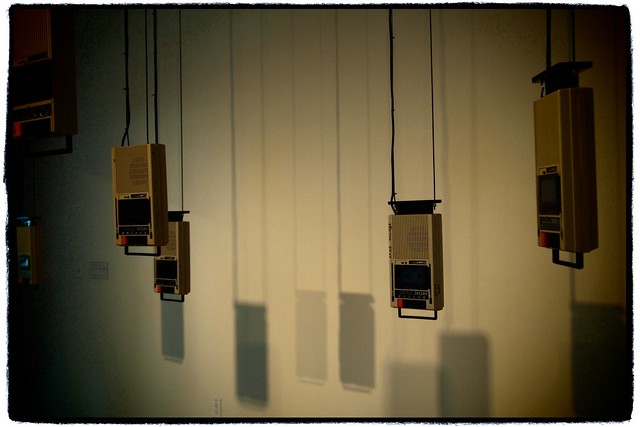 Meza created the individual tracks through capturing field recordings of water, editing them digitally, and then outputting them to individual tapes. She collected the Califone players on eBay, one at a time. Many retain inscriptions from their sources, usually middle or high schools, suggesting technology once cutting edge but now nostalgic.

Meza’s work both acknowledges and rejects the loosely-binding theme for End Things, TBA:12′s visual programming. Curator Kristan Kennedy’s concept of how things matter to humans both as objects and as ideas of objects is directly suggested by the fetishized idea of the tape players, meticulously collected and fragile. Meza agrees that “we are constantly collaborating with our materials or objects at hand.” Conversely, she rejects that objects should have such a hold on human  emotions, asking “…isn’t this is what commerce is all about: the fetishization of objects and our interaction with them? We tend to give objects a lot more power than they deserve.” 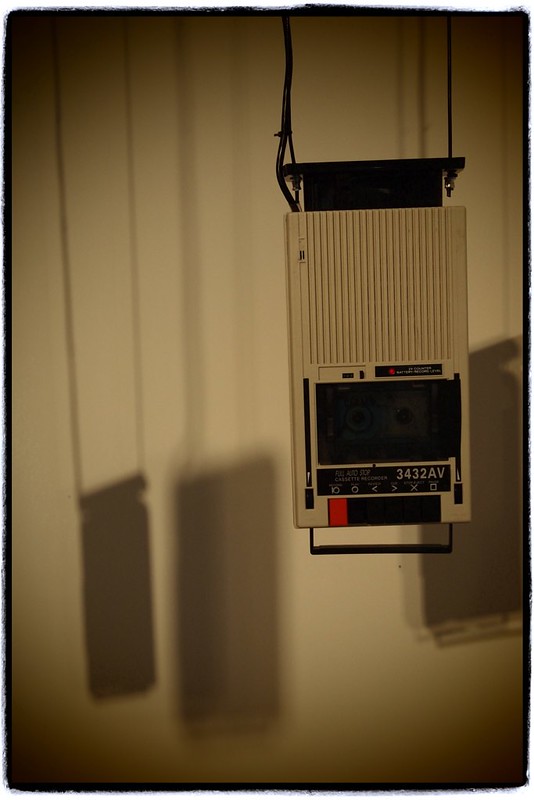 Inspired by John Cage’s work and coming from a history of unique projects, Meza pursues an eclectic path as a composer, musician, artist, curator, and (duly noted in her artist bio) surfer. As in her work, there is an element of timeless charm and authenticity in her worldview. She doesn’t distinguish between her attraction to Cage’s work and his life as a person; both are equally inspirational. And we are not meant to make distinctions between her work as a popular musician (Explode into Colors, Japanther) and her more abstract New Musics, Mourning Youth, and Sonic City PDX projects.

Kennedy’s visual programming often points towards the personal; how we make meaning for ourselves, how meaning arises, what it means to be human. Meza’s work in various aspects creates a similar authentic resonance; personal experiences are key. Meza refers to Cage’s quote from Kant: “there are two things that don’t have to mean anything [in order to give us deep pleasure]: one is music, the other is laughter.” Water offers a both singular and collective way for participants to make meaning or to simply experience sound as “music”.